Symbaroum is a role-playing game that takes place in a troubled world, filled with conflict, corruption and forgotten truths. The game takes its name from a vast and long-dead culture that once dominated the region where the great forest of Davokar now grows. Civilisation has expanded into the lands south of the dark forest, sending out expeditions into the depths seeking treasure and ancient lore amidst the scattered ruins.

Symbaroum’s stories focus on dramatic adventures and moral choices, seasoned with character development and hazardous encounters. Characters in Symbaroum possess great potential for power, but remain terrifyingly fragile – driving the necessity for careful tactics, open diplomacy and the willingness, occasionally, to run away!

More than twenty years before the start of the campaign that serves as the backbone of the game line, the people true to Queen Korinthia fled the blighted lands of Alberetor and crossed The Titans into Ambria. This fertile, but inhabited, land could support and sustain them, but to acquire it the refugees needed to use their skills in arms and warfare to lay claim.

The terrible events leading up to the introductory adventure in the core book, The Promised Land, have filled the landscape of Ambria with desperate but hopeful people, a society with the drive to survive tempered with a sense of unwarranted entitlement and suspicion. The new Ambrians have been invaded and become the invader, fought for freedom and yet became the slaver and executioner of barbarians inhabiting the great, ruined city of Yndaros at the heart of the realm. While the walls of the Queen’s Palace glitter and gleam, refugees wallow, outside the eastern walls of the royal residence, in a pit of desperation, depravity and squalor.

While Queen Korinthia and her loyal followers set about cultivating Ambria, raising hope from amidst the ashes, danger looms. To the north, Davokar both beckons and terrifies. The remnants of the Symbaroum Empire lurk within; part myth, part nightmare. Ruins and artefacts dot the landscape only hinting at the heights of the Empire and the cause of their passing. And amongst those shadows and tree trunks, other powers lurk – Elves, Trolls, Ogres and the scattered tribes of the barbarians.

To the south, across the great peaks of the Titans, the corruption and destruction of the war against the Dark Lords linger, the land hostile and toxic for those who remain behind. Korinthea’s army destroyed the Dark Lords and battered back their armies – but do the restless dead lie still or will they rise again and seek their enemy once more?

The setting of Symbaroum is both unforgiving and grim but filled with hope and potential. This is not the fantasy of Tolkien or Gygax – this is something darker, yet no less fantastic, for in the depths of Davokar await both forgotten ruins and ferocious abominations. 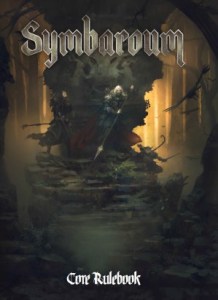 Core Rulebook – which provides the essentials of character development, game mechanics, abilities and magic, monsters and corruption, more than 70-pages of game background and an introductory adventure, The Promised Land.

Advanced Player’s Guide – expanding the options made available in the Core Rulebook, including more abilities and magic, expanded equipment, an additional character archetype, the Hunter, various optional rules and guidance.

Monster Codex – a bestiary of many creatures found throughout the realms of Ambria and Davokar, with mechanics for play, background detail and plenty of flavourful material to use as the basis for handouts and adventure seeds. The book includes a raft of new monstrous traits to expand upon those included in the Core Rulebook, as well as guidance on creating new creatures and balancing encounters.

The Copper Crown – released as a physical book, it includes the adventures The Mark of the Beast and Tomb of Dying Dreams, which form the loosely gathered parts of a trilogy alongside the introductory adventure The Promised Land.

Thistle Hold: Wrath of the Warden – the first chapter of The Throne of Thorns provides detailed background on the northern town of Thistle Hold and satellite settlement of Blackmoor, lurking in the eaves of the great forest. The first part of the book provides player background on the location, followed by GM detail that delves deeper. Much of the book describes the personalities, factions and locations that make up the multi-scene first adventure in the series.

Karvosti: The Witch Hammer – the second chapter of The Throne of Thorns that covers the detailed background of the seat of barbarian power in the southwestern corner of Davokar, a place sacred to the barbarians and of significant interest to Queen Korinthia and the wider factions within Ambria. As with the last volume, the start of the book splits across player and GM information; the bulk of the book continues the campaign started in the first book.

Yndaros: The Darkest Star – the third chapter in The Throne of Thorns, which covers the great city at the heart of Ambria, occupied by the Queen and her people, but once home to a faction of the barbarian people and in more distant times seat of other civilised cultures. The new city rises from the ruins of the old, a beacon of hope tempered with shadow and corruption. Again, the first sections offer detailed information on locations, people and factions for both players and the GM; the rest of the book lays out the many scenes of the third part of the campaign.

City Adventures – a scenario collection to accompany Yndaros, including three adventures. The book features Kumuma’s Conundrum, Smothering the Torch and The Heat of the Night, all set in the heart of Yndaros.

Symbar: Mother of Darkness – the fourth chapter in The Throne of Thorns, which delves deeper into the darkness and history of Davokar, including the opportunity to explore the ruined city of Symbar. Includes an expanded history of the Davokar region, rules for mounting expeditions, and additional traits, artefacts, creatures and more.

Adventure Locations – a scenario collection to accompany Mother of Darkness, including three adventures. The book features Lord of the Bog (set in Black Pitch Mire), The Chasm of Erdugald (in Davokar) and The Raven’s Beak Massacre (in The Ravens).

Alberetor: The Haunted Waste – the fifth chapter in The Throne of Thorns, which heads back into the twisted realm of Alberetor, to the south of the Titans, including support for creating adventures in the lost lands that the Ambrians left behind. Includes maps and descriptions of Alberetor and Lyastra, including a dozen specific persons, locations, and events, guidelines for travel in these inhospitable lands, a chapter detailing the Ambrian civil war, and new tables with curiosities, mystical treasures and artefacts.

Adventure Packs – Four adventure packs have been released, including optional rules, short adventures and tools for expanding your campaign.

Report 22:01:08 – A game artefact set out like the report of one of Queen Korinthia’s intelligence agents returning details on the lands and civilisations of the wider world. The Pay What You Want download includes a map of the world around Ambria, useful in understanding the location of the core adventures and the wider potential of conflict and exploration.

This site uses Akismet to reduce spam. Learn how your comment data is processed.

The Throne of Thorns on DriveThruRPG

Thistle Hold: Wrath of the Warden on DriveThruRPG

Karvosti: The Witch Hammer on DriveThruRPG

Yndaros: The Darkest Star on DriveThruRPG

Symbar: Mother of Darkness on DriveThruRPG

Alberetor: The Haunted Waste on DriveThruRPG